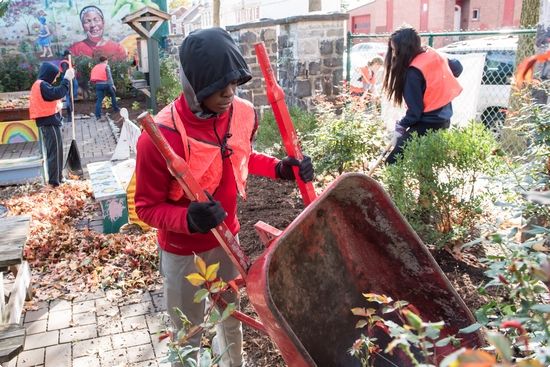 Hundreds of volunteers took to the streets of Pottstown on Friday to help beautify the town they call home.

The Fourth annual Pottstown CARES fall cleanup drew about 700 volunteers from The Hill School, Pottstown School District, Montgomery County Community College and other entities to work on a variety of projects.A person couldn’t take more than a few steps in the downtown Friday morning without seeing a host of volunteers in orange vests raking leaves and doing other chores.

All 522 Hill School students, in addition to faculty and staff members, participated in the cleanup.”This is my town, this is my home,” said Dave Wolters, a Hill School teacher who was collecting leaves near Chestnut and Warren streets. “So many people know about the Hill, but they don’t know us.””It’s nice to help clean up the city we’re in, whether it’s the whole year or just the school year,” added Sophia Manganiello, a junior at The Hill School who was cleaning up the area outside borough hall at High and York streets.
“It’s fun to be out here and help make it look a little better.”In addition to the leaf raking, volunteers also partnered with Habitat for Humanity to renovate a house at 430 Walnut St., repainted the borough’s Bike Share racks on High Street and trimmed bushes outside the YWCA on King Street.While the idea of raking leaves on a cool Friday morning might not be the most exciting activity for high school students, the Hill students seemed to embrace the task.
“I think they’re enthusiastic, and they understand why they’re doing this,” said Cathy Skitko, a Hill School spokeswoman.She noted that student leaders helped get the point across to students regarding the importance of the work they were doing. They estimated that 700 volunteers working one day have the same impact one borough employee would have working every day for a year.”People that age are big on volunteerism, so it’s not hard to get them going,” added Wolters.
“It really isn’t.”Manganiello said that after students began to see the effect their work had on the community and hear the appreciation from residents, the effort was something they could more easily invest in.”I think the first year everyone was hesitant about it,” she said. “After that, we don’t mind doing it.”The Pottstown CARES program began in 2013. CARES stands for community, awareness, responsibility, empowerment, and sustainability. This year, the group was joined by representatives from the Tri-County Chamber of Commerce and others from Lowe’s, which contributed tools or the cleanup.
from
http://www.readingeagle.com/news/article/students-taking-care-of-pottstown