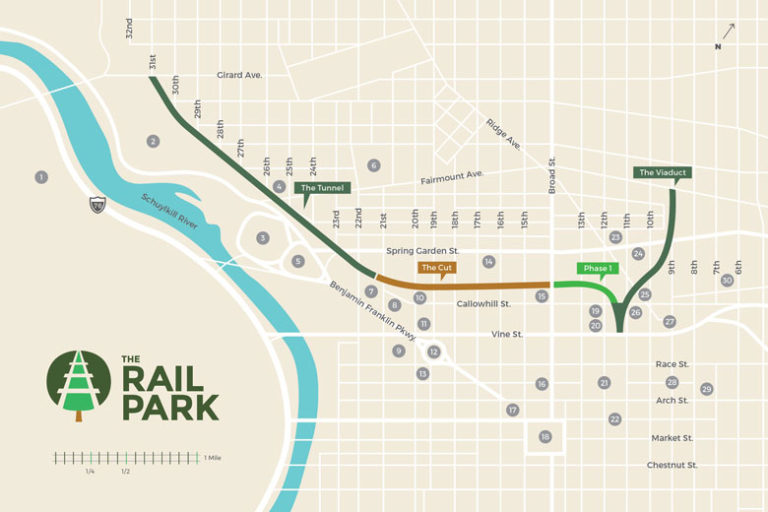 For years, plans have been progressing to turn the Reading Viaduct into Viaduct Rail Park, an elevated park in the Callowhill neighborhood.

The Viaduct Rail Park, Philadelphia’s answer to New York’s High Line, is a highly anticipated project that has been in the works for years.

The project will green a quarter-mile section of the unused rail line from Broad Street southeast across 13th and 12th Streets to Callowhill Street.

Today marks a major day for Viaduct Rail Park’s progress —  Philadelphia broke ground on phase one of the project.

(Photo courtesy The Rail Park)
Phase 1 of the Viaduct Rail Park project will turn a quarter-mile section of abandoned train tracks into a green elevated park.

Upon completion, the quarter-mile space will be transformed into a verdant park complete with walking paths, lighting, seating, beautiful landscaping and swinging benches. Phase one of the project encompasses the area from Broad Street to the 1300 block of Noble Street, the bridges in that immediate area and 12th and 13th streets to Callowhill Street.

Phase one is expected to be completed in early 2018. Stay tuned for more on this exciting piece of development news!